While the slowdown in Germany’s manufacturing sector (especially in automotive), has a negative impact on Western Europe as a whole, German firms and domestic demand are proving rather resilient for the time being. German business insolvencies are expected to increase by 1% this year followed by stagnation in 2020.

Weak external demand and elevated uncertainty continue to take their toll on German industry. Prospects for the export-reliant industrial sectors remain bleak in the short term. The automotive sector in particular will likely continue to grapple with the deterioration in the external environment, as well as lingering uncertainty about trade policy and consumer preferences. However, the proportion of sales made on credit to B2B customers by German survey respondents increased sharply to 59.3%. This compares to 60.4% in Western Europe and 67.2% in Eastern Europe and is an increase up from 24.7% last year. This increase ranks third among the countries surveyed in Western Europe, after Switzerland (65.6%, up from 28.1% last year) and Austria (65.3% up from 29.5% one year ago). The increased use of trade credit in the B2B transactions of German survey respondents might be a reflection of strong domestic demand and resilient businesses, which sustain the economy despite the current slowdown in the German manufacturing sector (especially in automotive) and bleak prospects for the export-reliant industrial sectors. Against this backdrop, the rate of economic expansion in Germany is likely to remain modest over the coming months. 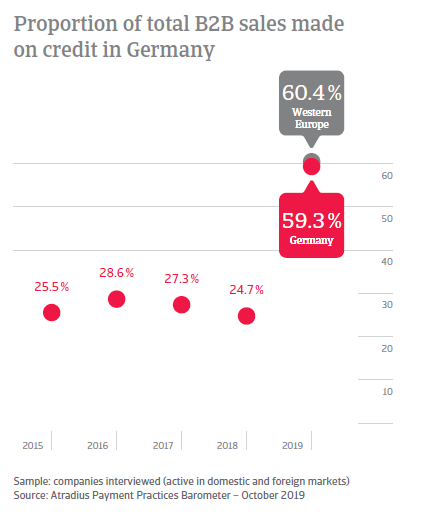 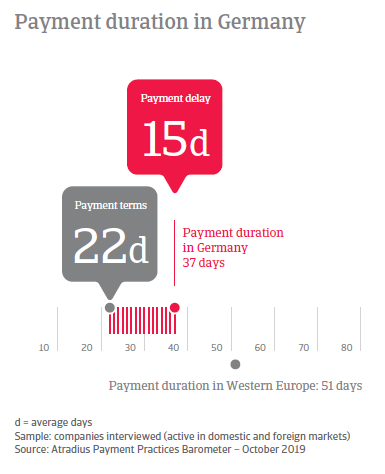 In the current challenging business environment,(trade conflicts and Brexit), German survey respondents appear reluctant to give B2B customers longer to settle invoices than last year. Average payment terms recorded in Germany stand at 21 days from invoicing (22 days last year). These are the second shortest observed in Western Europe and compare to a 34 days average for the region (and 37 days in Eastern Europe).

23.8% of the total value of B2B invoices issued by German respondents over the past year was past due. This is the third lowest figure recorded in Western Europe (28.9%), after Denmark (20.3%) and the Netherlands (23.6%). Consistent with improved payment behaviour from B2B customers, resulting in increased timely payments (72.7% of invoices paid on time compared to 61.5% one year ago), respondents in Germany turn overdue invoices into cash significantly earlier than last year (on average 36 days, down from 39 days last year). This is in line with observations for the region overall, where over the past year payment duration decreased on average to 52 days down from 55 days last year. However, to manage potential liquidity constraints arising from late payments, 31% of German survey respondents needed to take specific measures to correct cash shortfalls. 23% of respondents either paid their own suppliers late or pursued additional financing from external sources. However, 45% of respondents reported no significant impact on business arising from late payments. This finding points to a sharp focus on credit management from businesses surveyed in Germany. A standout survey finding in Germany is the notable increase in the proportion of write-offs of uncollectable accounts, currently averaging 2.1% of the total value of B2B receivables (up from less than 1% last year). This compares to a 2.2% average for Western Europe and to a 1.6% average for Eastern Europe. This finding highlights lower efficiency in collection of overdue accounts in Germany, ultimately eroding business profitability.

Overview of payment practices in Germany

German respondents from the construction sector extended the longest payment terms to their B2B customers (averaging 35 days from invoicing). Average payment terms across the other sectors surveyed in Germany range from 26 days in the transport sector, to 19 days in both the metals and agri-food sectors.

Trade credit risk is highest in the German chemicals sector

Over the past year trade credit risk in Germany has significantly deteriorated in the chemicals sector, where 33% of the total value of invoices remained unpaid at the due date. The consumer durables sector recorded the greatest improvement in customers’ payment speed over the past year. The credit risk trend in the German metals sector deteriorated significantly over the same period.

German micro enterprises are the swiftest to cash in overdue invoices

Over the past year, the payment behaviour of B2B customers of German micro enterprises improved markedly. The proportion of paid on time invoices increased to 86% from 60% one year ago. Due to this improvement, German micro enterprises are now the swiftest to collect payment of past due invoices (on average with 19 days from invoicing down from 31 last year). Despite this, an average of 27% of the total value of B2B invoices issued by both SMEs and large enterprises in Germany is overdue. This caused an increase in the average invoice-to-cash turnaround for SMEs (averaging 43 days from 40 last year). In contrast, large enterprises cash in past due payments earlier than one year ago (on average after 37 days from invoicing down from 44 last year). 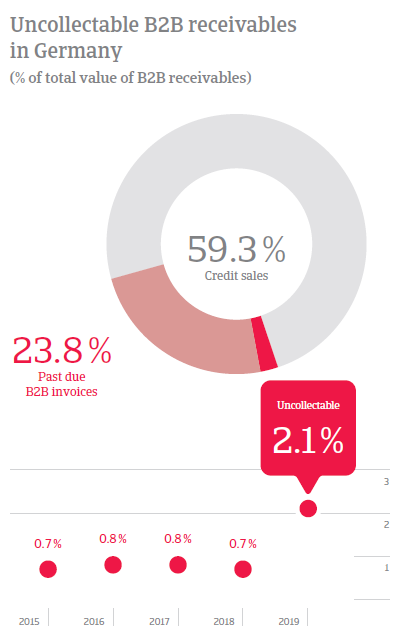 Due to the lengthening of the invoice-to-cash turnaround process, German SMEs have a markedly worse track record when it comes to collecting overdue payments, with 2.7% of B2B invoices written off as uncollectable (up from 1% last year). The average for large enterprises is 2% (up from less than 1% last year) and less than 1% from micros enterprises (steady compared to one year ago).

Thomas Langen, Senior Regional Director Germany, Central and Eastern Europe of Atradius, commented on the report: “Currently, the Eurozone is facing the impact of lower external demand, which is particularly hitting Germany, its largest economy. Although German firms are proving rather resilient for the time being, the rate of economic expansion in Germany is likely to remain modest in the second half of 2019. Stronger import growth will result in a neutral contribution from net trade this year, with domestic demand contributing as much to GDP growth as the previous year.

Several risks threaten the outlook: the potential escalation of the trade dispute between the US and Europe, the still uncertain outcome of Brexit, and the current political and budgetary uncertainty in Italy. Moreover, the global trade slowdown continues to weigh on Germany’s export prospects, leading to a reversal in the decline of insolvencies. In 2019, German business insolvencies are expected to increase by 1% followed by stagnation in 2020. As the survey findings show, German businesses are concerned about future deterioration in customers’ payment practices. Amid these concerns, protection of receivables becomes essential to ensure safe and profitable growth of the business”.

The German automotive sector has benefited increasing domestic production as well as a growing share of car production overseas.

After nearly a decade of annual improvements, 2019 is expected to mark the first year of insolvency growth since the crisis.

EU to speed up completion of free trade agreements