Our Management and Supervisory Boards drive our business, guided by the interests of our stakeholders and the needs of our customers.

The Management Board has five members and is responsible for achieving Atradius' aims, strategy, policy and results. It has a legal duty to be guided by the interests of Atradius and the businesses connected to it. 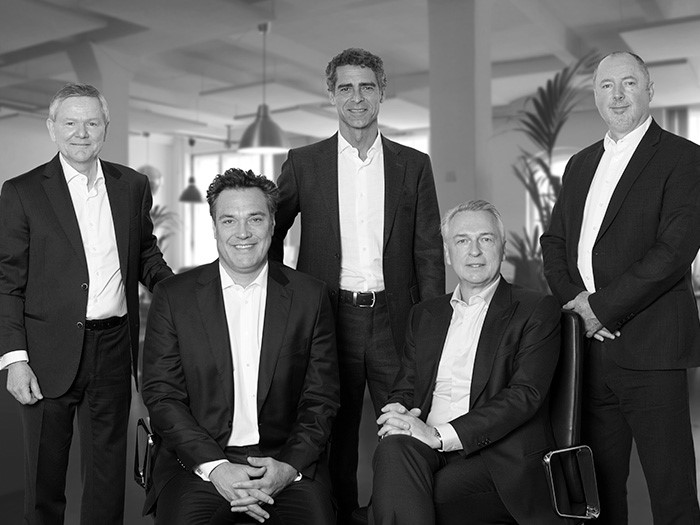 The General Meeting has the authority to appoint a Management Board member on the recommendation of the Remuneration, Selection and Appointment Committee of the Supervisory Board.

David Capdevila was appointed Chairman of the Management Board and Chief Executive Officer (CEO) of Atradius N.V. in January 2020.

David has a degree in Actuarial Economics from the University of Barcelona and an MBA from IESE Business School in Barcelona.

Andreas Tesch was appointed Chief Market Officer (CMO) in November 2011. He is responsible for the credit insurance operations, as well as Special Products, Dutch State Business and Group Marketing and Communication.

He is the chairman of Atradius Trade Credit Insurance, Inc. and a Board member of Atradius Dutch State Business N.V. and Atradius Participations Holding S.L.U. amongst others. Andreas has been President of the International Credit Insurance and Surety Association (ICISA), and has worked for Atradius and its predecessor companies since 2001. From January 2007 to October 2011, he was Director of Global, Oceania and New Markets and, before that, Director of Risk Services for Central and Eastern Europe. Prior to joining Atradius, he was a Director at Simon Kucher & Partners, advising clients on strategy and mergers and acquisitions.

Andreas has a degree in Business Administration from the University of Cologne.

He is responsible for Group Risk Management, Group Buyer Underwriting, Risk Services and Outward Reinsurance. He has worked for Atradius and its predecessor companies since 1983. From February 2006 to November 2012, he was Director of Group Risk Management and, before that, Director of Risk Services for the Netherlands and Nordics. He has held various positions in the areas of claims and recoveries, buyer underwriting, and special risk management.

Christian graduated in Business Administration and Economics in Utrecht.

Claus Gramlich-Eicher was appointed Chief Financial Officer (CFO) in May 2013.

He is responsible for Group Finance, including Finance Program Management, as well as Group Control and Corporate Finance & Tax. He is also a Board member of Atradius Finance B.V. and Continental Compañia de Seguros de Crédito S.A., as well as a member of the Advisory Board of Kemiex A.G.

He has more than 25 years’experience in the financial services sector. Before joining Atradius, he worked for Allianz since 1993 in various senior financial and investment management roles in Germany, Spain, Italy and the Czech Republic. He has also held non-executive Board member positions in insurance, investment management and pension fund management companies.

Claus has a degree in Economics and Business Administration from the University of St. Gallen and a CEMS Masters degree in International Management from ESADE in Barcelona.

He is responsible for Project and Process, IT Services, Bonding, Collections, Inward Reinsurance, and Instalment Credit Protection. He is the Chairman of Atradius Reinsurance DAC and a Board member of Atradius Collections Holding B.V. and Atradius Participations Holding S.L.U. Furthermore, Marc has worked for Atradius and its predecessor companies since 1997.

Before his appointment as CIOO, he served as Director of Risk Services in the UK and Ireland, and Special Products worldwide. Prior to joining Atradius, he spent 10 years at HSBC Corporate as an analyst in the retail and aerospace sectors.

Marc graduated in Business Studies at Oakwood College of H&FE in Kent.

Through our Customer Service Charter and investment in innovation, we’re committed to leading our people and customers to better products and services than anywhere else.

As a global credit insurer, our remit is to enable successful trade. We are committed to supporting trade that is both ethically and environmentally sound.