The Danish economy has regained some of its international competitiveness due to structural reforms that addressed the issue of high labour costs. 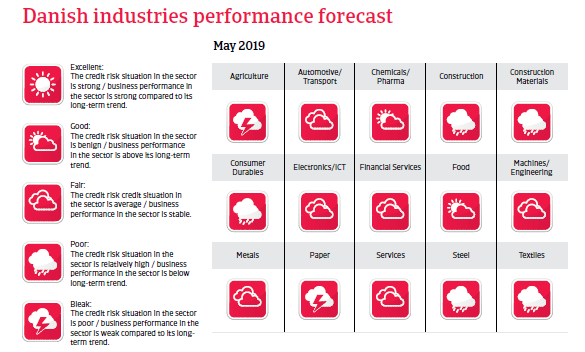 Insolvencies expected to level off in 2019

Danish business insolvencies increased sharply in 2015 and 2016 due to the introduction of a new form of company in official statistics and the clearing of a backlog of insolvencies by the national statistics office. It is expected that business failures will just level off this year after a 7% increase recorded in 2018.

The Danish economy is expected to grow about 2% in 2019, driven by robust domestic demand, while exports remain susceptible to weaker external demand.

Private consumption is sustained by historically low interest rates, rising disposable incomes due to a tight labour market and low inflation. Both government consumption and industrial production are expected to pick up in 2019.

The Danish economy has regained some of its international competitiveness due to structural reforms that addressed the issue of high labour costs. However, Danish exports could be affected by lower Eurozone demand, especially from Germany. Additionally, Brexit could have a negative impact on exports, as the United Kingdom is Denmark’s third largest export market.

Public finances are healthy, with small budget surpluses expected in 2019 and 2020. This provides room for fiscal stimulus if required.

The insolvency level is high compared to other industries, and after increasing in 2018 business failures are expected rise further in H1 of 2019.

As the UK is a major Danish export market, a hard Brexit could trigger a significant decrease in Danish export of food and agricultural products.

The survey’s biggest negative change in the proportion of uncollectable receivables was recorded in Denmark; up from 1.3% in 2017 to 1.8% in 2018.