Emerging Asia remains the fastest growing economic region in the world with expected growth rates of 5.8% in 2017 and 5.6% in 2018. However, China’s economic growth  will slow down in the medium term and several economies in the Asia Pacific region are sensitive to this development. A high percentage of respondents in the region stated their intention to increase credit management practices to better protect their businesses against the potential impact of slower growth.

With an average of 45.9% of B2B sales on credit terms, there hasn’t been a meaningful change in the propensity of respondents in Asia Pacific to use this method of payment compared to 2016 (46.2%). Credit sales continue to account for a higher proportion of B2B sales than that seen in Europe (40.0%) and in the Americas (45.5%). 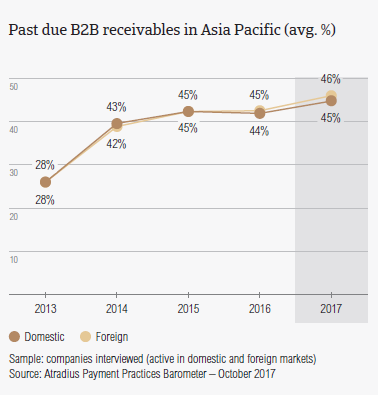 The average payment duration for Asia Pacific decreased from 59 days in 2016 to 55 days this year. This follows a shortening of payment terms and fewer payment delays than in 2016.

Despite a decrease in the percentage of respondents citing insufficient availability of funds in 2017 (38.6% vs. 40.2% in 2016), this remains the most often cited reason for payment delays in the Asia Pacific region. 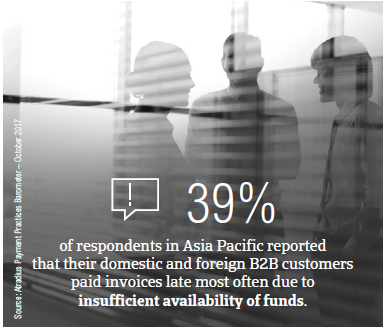 30.3% of respondents in Asia Pacific plan to do more to protect their businesses from the impact of Brexit, the slowdown in Asia and US protectionism. This is a significantly higher percentage than those registered in the Americas (25.9%) and in Europe (15.5%) and may highlight the respondents’ perception that they are more exposed to risk than their peers in other regions surveyed.

Find out more about how Atradius can support your credit insurance requirements. 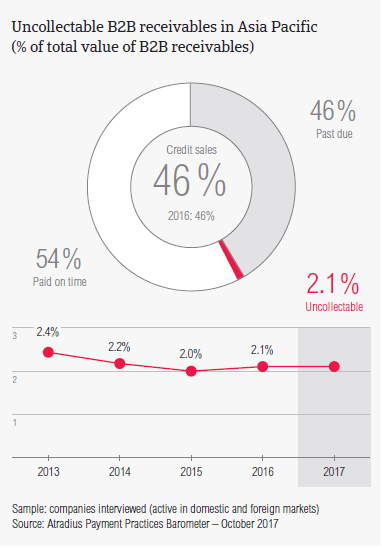 Looking ahead, more respondents in Asia Pacific expect a slight deterioration than an improvement in the payment behaviour of their B2B customers over the coming 12 months. 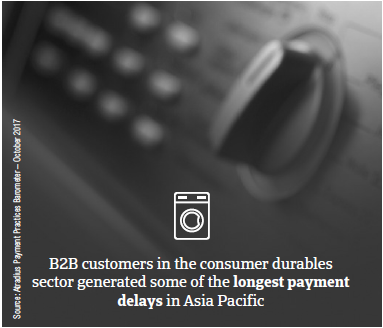 The proportion of domestic and foreign past due B2B invoices in Taiwan (domestic: 42.7%; foreign: 47.2%) is almost in line with the regional averages.

China is rebalancing its economy away from exports and investments towards consumption. This is weighing on GDP growth of its trading partners.

The automotive sector faces decreasing domestic sales due to a decrease in population and a growing share of elderly citizens as well as tax hikes.