Due to overdue B2B invoices, 20.3% of respondents in Romania had to postpone payments to their own suppliers while 14.8% had to correct cash flow.

Romania had a low proportion of B2B sales on credit and respondents here said they mainly opt for credit terms if they trust buyers and have built a long-term business relationship with them. The proportion of past due B2B receivables is one of the lowest in the region. Still, most Romanian suppliers said that past due invoices led to delay of payments to their suppliers and the need to take specific measures to correct cash flow. Only domestic B2B receivables here were written off as uncollectable mainly because the customer went bankrupt or out of business.

Selling on credit because of long-term relationships with B2B customers

In 2018, survey respondents in Romania were the most averse to selling on credit terms in the Eastern European region. Only 17.7% of sales have been made on credit, showing a clear preference for other payment methods. Similarly to their peers in the region, Romanian respondents seem more averse to selling on credit to B2B customers abroad than to domestic buyers (15.5% versus 19.8%). Additionally, the proportion of B2B sales on credit in Romania is significantly below the regional average of 36.9%.

The primary reasons that respondents grant trade credit to their domestic B2B customers are loyalty and long-term business relationships. The fact that they trust customers also influences their decision to opt for credit. The main reasons for refusing credit sales to domestic B2B customers are the financial weakness of the customer and the customer’s poor payment behaviour (mentioned by 40.0% and 34.7% of respondents).

We decided to grant trade credit because we’ve developed some good relationships in a sector in which we operated for a long time. We trust the people we collaborate with.

Romanian respondents mentioned long-term cooperation as the top reason why they grant trade credit to B2B customers abroad. The decision is also aimed at increasing business with new customers and expanding international activity. Companies in Romania mainly refuse credit sales to their foreign B2B customers because of high economic and political risk in the customer’s country (mentioned by 28.6% of respondents) and because of the financial weakness of the customer (35.7%).

We trade on credit with our foreign B2B customers to ensure future collaboration.

25.9% of Romanian respondents expect a slight increase in their company’s DSO

In 2018, the average Days Sales Outstanding (DSO) figure recorded in Romania is 45 days. This is one of the lowest DSO figures in the region and well below the 59 days registered in the region overall.  Most respondents in Romania (55.2%) do not expect any changes in their company's DSO over the coming 12 months. However, a significant percentage (25.9%) expect a slight increase. 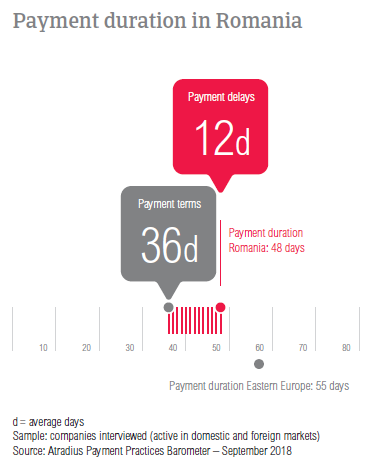 Respondents did not report major differences in payment delays by their B2B customers. Domestic B2B customers delay payments, on average, by 13 days while foreign B2B customers by 11 days. Based on the survey findings, the average payment duration in Romania is 48 days, seven days shorter than what was reported for the region overall.

Payment delays by domestic B2B customers seem to occur most often because of insufficient availability of funds. This was stated by 80.0% of respondents and is also the second highest percentage after that of Bulgaria. Respondents in Romania also cited the formal insolvency of the buyer (17.0%) and incorrect information on the invoice (15.6%) as the other main reasons for domestic payment delays.

The main delay factor by B2B customers abroad was also insufficient availability of funds. 44.0% of Romanian respondents stated this, a higher percentage than for Eastern Europe overall (35.4%).  Other reasons for payment delays by foreign B2B customers were disputes over the quality of goods delivered or services provided, the complexity of the payment procedure and inefficiencies of the banking system (each of these reasons stated by 16.0% of Romanian respondents). 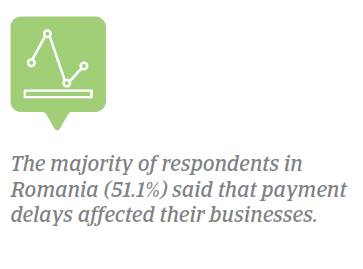 The majority of respondents in Romania (51.1%) said that payment delays affected their businesses. Due to overdue B2B invoices, 20.3% had to postpone payments to their own suppliers, 14.8% had to take specific measures to correct cash flow, and 13.2% reported revenue loss. 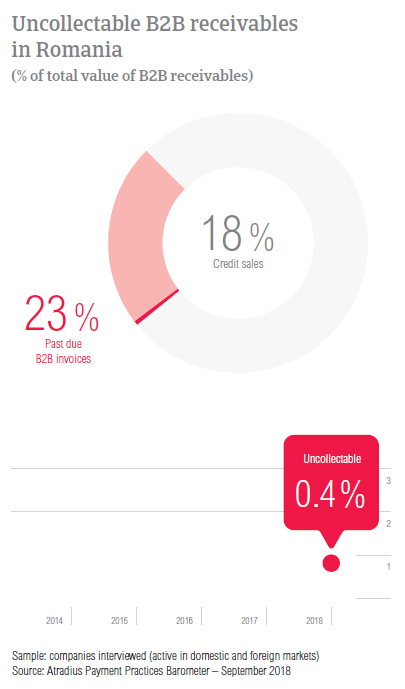 Uncollectable receivables originated most often from B2B customers in construction, consumer durables, food, business services and services. 71.8% of Romanian respondents said that the main reason for writing off B2B receivables as uncollectable is bankruptcy. This is the second highest percentage in the region after that in Slovakia. The second most frequently reported reason for write-offs is the failure of collection attempts, stated by 16.4% of respondents in the country.

Mainly optimistic about the payment behaviour of their B2B customers 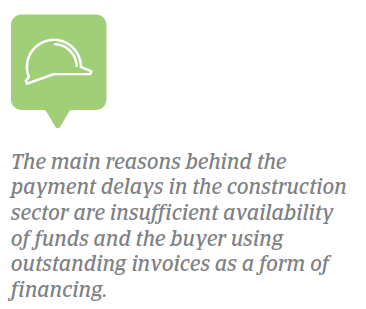 When asked about the payment behaviour of their B2B customers in the coming 12 months, 54.0% of respondents in the construction sector said that they don’t foresee any changes. Of those who expect changes, 29.0% expect improvement and 18.0% deterioration. In respect to respondents in the construction materials sector, 36.0% do not expect changes, while 28.0% foresee deterioration and 36.0% an improvement in the payment practices of their domestic and foreign B2B customers.

Despite a minor decrease in overdue B2B invoices, 45.0% of businesses in Eastern Europe reported having to manage the negative impact of payment delays.

The global economic upswing continues to strengthen but US policy uncertainty and a potential trade war could quickly darken the bright skies.

Banks remain rather cautious in providing loans to the industry due to the large number of insolvencies and generally volatile market demand situation.