2016 was a difficult year for businesses in many developed markets. Despite another year of low energy prices and ultra-loose monetary policy, global GDP growth slowed half a percentage point to 2.5%. In this environment, the on-going improvement in insolvency statistics weakened. Corporate failures decreased 3% in 2016, a marked slowdown from the 7% decline seen in 2015 and 13% in 2014. The aggregate level of insolvencies is slowly approaching 2007 levels.

Corporate failures around the world are expected to continue declining in 2017 but at a slower rate of only 2%. Global economic growth is expected to accelerate to 2.8% but the business environment is facing many problems. The stimulus of lower energy prices is fading. While this should encourage investment in commodity exporting countries, it will increase costs and lower private consumption growth elsewhere. Increasing price pressures also motivate monetary tightening in some markets, which will increase the cost of financing for many firms in advanced markets. Furthermore, the level of political uncertainty in Europe and North America is unprecedented in recent decades and will weigh on economic activity.

Political uncertainty – a downside risk in the eurozone

Periphery continues to outperform, but improvements are stabilising. The peripheral economies of the eurozone (Greece, Ireland, Italy, Portugal and Spain) have enjoyed average declines of 10% in insolvencies from 2015 to 2016. Overall levels across all five markets remain high, but in 2016 these were improving with the exception of Ireland whose insolvencies stabilised. Ireland is forecast to see an increase of 2% in corporate bankruptcies in 2017 due to still highly-leveraged public and private sectors and heavy dependence on FDI, exposing companies to external volatility like the potential shock from Brexit.

Robust, broad-based economic growth in Spain supported the country’s business environment despite the inconclusive general elections and the eventual establishment of a minority government. Spanish GDP growth is expected to slow slightly in 2017, bringing the expected decline in the rate of insolvencies down to 10%. Greece is forecast to finally see a reversal in the upward trend of insolvencies, the number of annual business failures has increased six-fold since the crisis. Bank recapitalisations and the removal of capital controls will support firms there.

Portugal is forecast to see only a 2% reduction in corporate insolvencies in 2017, following a 7% decline in 2016. Italy is also estimated to have enjoyed a 7% decrease last year, but the insolvency level is forecast to remain unchanged this year.

Political uncertainty is a potential headwind for eurozone businesses. 2017 should be an eventful year on the eurozone political calendar and the increasing support of populist parties is making the outlook highly uncertain. In March there are general elections in the Netherlands, in May presidential elections in France and in September federal elections in Germany. Early elections are also likely to be held in Italy, possibly this summer, following the resignation of PM Renzi after the constitutional referendum in December 2016. All of this is also occurring with the potential commencement of Brexit negotiations between the UK and EU.

Political uncertainty is likely to strain business activity due to the negative impact it has on sentiment and business investment. At this point, the effects are relatively muted – just slowing down the rate of improvement. France and the Netherlands are expected to see a 3% decline in insolvencies, while no improvement or worsening is predicted in Germany and Italy. However, due to the uncertainty around the elections, this outcome is subject to heightened downside risks. Depending on the results of the elections, policymaking directions may change in a business-unfriendly manner, weighing on investment and employment. Slowdowns in one market may also lead to spillover into others due to close trade and investment ties.

Under the new administration, the United States’ outlook is more uncertain as well. The US business environment was more benign than expected with insolvencies stabilising since 2014 at around 90% of their pre-crisis level. GDP growth slowed in 2016 primarily due to lower investments, stemming from low oil prices, and a cyclical downturn in inventories. GDP is forecast to pick up this year thanks to higher oil and gas prices which are turning around investment growth and should stabilise claims and defaults in oil and gas and related sectors. Growth should be further supported by President Trump’s promised fiscal stimulus which, alongside deregulation, should help US businesses. However, the details of either of these remain unknown.

While there could be some stimulus which would help most businesses, there are many tangible downsides coming up. In light of the balanced risks, we predict no change in the US. One clear downside to American businesses is that inflation pressures are increasing and the Fed is expected to increase interest rates three more times over the year, which will tighten access to finance and hurt all businesses, especially those that are heavily indebted. The US dollar is also forecast to remain strong which will continue to damage the competitiveness of US exports.

Insolvencies are forecast to stabilise in Canada, potentially declining only 1%. Canada’s economy has also suffered through the low oil price environment over the past couple years. While overall corporate insolvencies fell 6% last year, there was an increase of 54% in the mining and oil & gas extraction sector. Recovering prices should help the sector stabilise. Canada’s economy is forecast to pick up in 2017 with higher public investment for an extensive infrastructure programme and another year of record low interest rates supporting business spending and investment. However, Canada’s insolvency level is at record lows, almost half its pre-crisis level, offering little room for large improvements. Furthermore, there are many uncertainties on the horizon which may push insolvencies upwards. These stem primarily from US policymaking due to the close trade and supply chain linkages between the two countries.

Last year insolvencies in the UK were higher than expected due to changes to claimable expense rules which led to the liquidation of nearly 1,800 personal service companies (PSCs) in Q4. As a result, total insolvencies rose 15%. Excluding these PSCs though, the overall change was only +1%, more in line with the 2% uptick we previously forecast. For 2017 our outlook remains broadly unchanged: uncertainty surrounding negotiations with the EU on GDP, particularly through business investment and confidence, should cause insolvencies to increase moderately. However, due to the exceptionally high level of the 2016 figures, we predict a -8% change signalling a statistical adjustment as opposed to economic strength.

Danish statistics also showed a sharp increase in 2016: +63%. The case there however is more exceptional due to the introduction of a new form of company in official statistics and the clearing of a backlog of insolvencies. As such, it is more difficult to provide an accurate outlook on real business developments and headline figures should be taken with a grain of salt. Based on our economic outlook, we predict total insolvencies to decline 21%, an adjustment from exceptionally high levels last year. 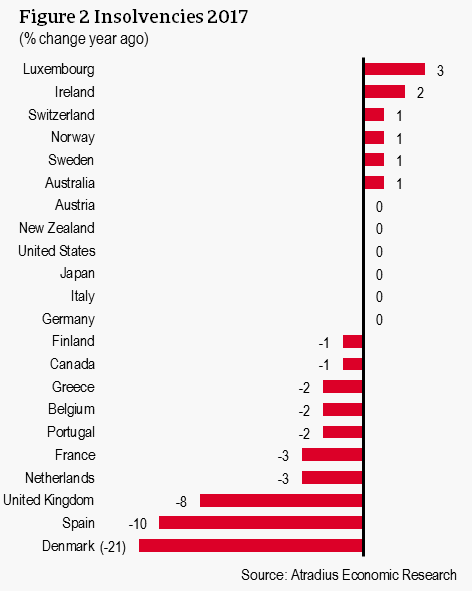 Steady, but uneven growth is expected to persist. Domestic demand is the main driver of expansion, but manufacturing and export performance remain subdued.

The most promising markets of 2017

Atradius picks the top most promising markets for business opportunities in 2017 due to previous strong performances and expected improvement in 2017.